Mobile application developers used to rely on a small number of native frameworks for mobile app development. In the present age, technological advancement is continuously transforming the way of developing mobile apps works. Now, we have various frameworks for developing mobile apps; hybrid as well as cross-platform. It is a common practice now. We have various advanced technologies, and some of them have become trends. These trends keep changing every year. The applications that have been in trend in previous years might not be in this year’s list of trends. Almost all of us are looking for ways to find out which technology will be this year’s hottest technology.

Undoubtedly, the implementation of smart and innovative strategies of business has evolved, and we can tell that there is a huge shift as compared to the previous years. Almost all organizations are now relying on mobile applications rather than desktop websites to maintain uninterrupted connections and better communication with their customers globally. However, building a successful mobile application requires choosing a platform, databases, mobile frameworks, and technologies. For the last decade, the number of Android and iOS applications have greatly increased. Cross-platform and hybrid mobile applications have gained so much popularity. For this, we can thank out-standing mobile app development frameworks that have been used to transform the way mobile applications are built.

So Why Is Everyone Confused?

App developers today appreciate the benefits that have been provided by technological advancements. But according to them, many complications have also entered the realm of app development, such as choosing the best platform for app development.

Almost all businesses are looking for the best, and in order to do so, they have many requirements and concerns regarding the choice of platform for the development of the applications.

In this article, we have discussed the best mobile app development frameworks to minimize the difficulty faced when choosing a platform. Have a look!

It is an open-source HTML5 mobile app development framework that enables developers to build cross-platform mobile applications. Ionic has become the favourite of many developers as one of its major benefits includes its ability to utilize elements of default user-interface such as navigation menu, forms, tab bars, filters, etc. It means that developers do not have to spend hours taking care of elements of their user-interface and can put all of their attention towards developing the application.

Moreover, if the developer has any previous experience with CSS, HTML5, or JavaScript, he can easily work with Ionic. Plus, if this framework is being used with a native app in the PhoneGap, one can obtain enhanced performance as compared to hybrid apps.

Why Use the Ionic Framework?

The benefits of using Ionic are the following:

Ionic uses plugins of Cordova in order to access features like flashlight, Camera, GPS, etc. App developers can use such modules to build high-quality applications in no time.

Which Companies Have Experience With Ionic App Development Framework?

It is the most suitable and flexible solution for building mobile applications for iOS and Android. React native is the most used app development framework. It allows developers to build applications on both Android and iOS platforms as well as enable them to develop apps that have shorter development cycles, high performance, and quick deployment.

React native does not require complex programming language for building mobile apps because it deals with JSX for developing Android and iOS apps. Moreover, by using react native, better animations can be achieved. 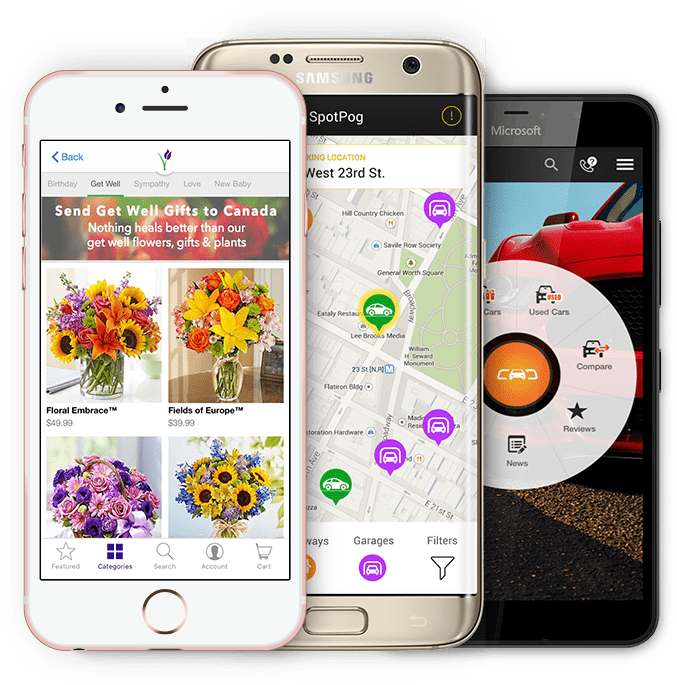 Which Companies Have Dealt With React Native For Building Mobile Apps?

Why Use React Native For Building Mobile Applications?

It is a complete cross-program Javascript system as it is a JavaScript library that is prepared to-utilize. jQuery offers a decent scope of modules like substance slider, picture slider, spring up boxes, content slider, and so on. It is simpler than other Javascript libraries as it requires less coding so as to acquire comparative highlights when contrasted with numerous different libraries. jQuery makes it more straightforward and intelligent and easy to use website pages. It is genuinely intelligible by each web search tool, and as far as Web optimization, it is improved and better now.

PhoneGap is another mobile app development framework used to build cross-platform mobile applications. Its other name is Apache Cordova. By using PhoneGap, developers can build mobile applications that are usually installed as native apps across various devices. It allows for using a single code base for developing multiple versions of a mobile app. Inbuilt features of devices such as Camera, Phonebook, Storage, GPS, etc., are supported by PhoneGap.

It features independent APIs and allows developers to access mobile device hardware in a seamless manner. Appcelerator uses components of the native user interface. Thus it is able to deliver high performance to the users. If you are in need of a framework that helps you to develop mobile applications with great ease and comfort and in a short time, Appcelerator is what you should go for.

Xamarin is considered as an extraordinary tool for developing cross-platform mobile applications. Developers like Xamarin because it is a smarter way of developing robust mobile applications. Developers are able to use C# for iOS, Android, and Universal for Windows when building mobile apps using Xamarin. It has proved to be a reliable tool that delivers applications with enhanced native performance. Xamarin has a community of over 1 million developers. It helps a developer to build a unique native user interface, and to build a mobile app that is user friendly and offers a comfortable experience to its users.

Why Use Xamarin For Building Mobile Applications?

Following are the benefits of using Xamarin app development framework:

Intel XDK is utilized for making versatile applications utilizing JavaScript and HTML5. It permits app developers to create applications for Alcove, Amazon, Android, Windows, and iOS utilizing a solitary codebase. App developers use Intel XDK for one significant explanation, i.e., its User interface offers simplified highlights; henceforth, User Interfaces are extremely simple to manufacture. It offers application investigating and profiling choices, which is the reason that testing the application on different gadgets turns out to be simple.

Flutter offers consistent improvement of portable applications. It is a set of tools for developing software from Google that empowers designers to compose codes quicker than expected. Flutter makes the procedure of application improvement simpler as it gives a solitary codebase to iOS and Android. It offers the advantage of making a new widget while changing the old ones flawlessly. Henceforth it takes into consideration building responsive, versatile applications instantly.

It enables mobile app developers to develop cross-platform mobile applications within no time, and it does not require large teams. Corona SDK allows developers to write a solitary code base that functions finely with Nook, iOS, and Android. By using Corona SDK, the graphic content appears smoother, and interactivity is enhanced. Additionally, Corona SDK development allows for automatic content scaling across multiple devices.

There are multiple options if we talk about mobile app development frameworks, and each of them is unique in their own way. You just have to pick the one that suits your app’s requirements and your skills, of course. The frameworks that we were just discussing above are popular because all of them deliver what they promise, and they offer extraordinary features that are not only easy to use but also caters to the needs of modern-day users’ needs. When choosing a framework for mobile app development, it is better to study each framework and know what it has to offer. However, if you are hiring someone to build your mobile app, discuss with them your requirements and let them explain to you how each platform can and cannot be suitable for your app.